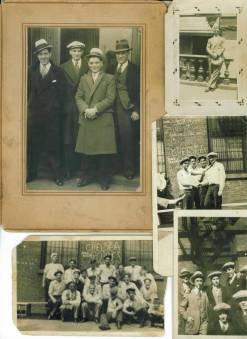 The man in the foreground in the picture, in the upper left hand corner, third from the left, is my dad.

He was known on the streets as GG, and those are his boys, The Chelsea Boys, or The Thirty-first Street Boys. They went by either moniker, it didn't matter to them, cause by any name, they were tough. He and his boys were into the rackets. Mostly bootlegging and running numbers, with a slight case of robbery and larceny on the side.

Dad did some amateur boxing in his day, but he was told his style of boxing was better left to the streets, and that's where he did it. Aside from his gang, Dad had some powerful people in his corner, they were called family.